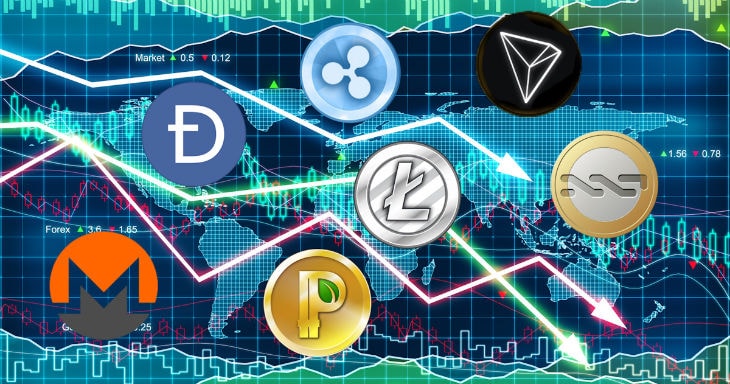 By now almost everybody has either been introduced to or have heard of the cryptocurrency space on the news, particularly since Bitcoin took the world by surprise with its incredible surge in price.

Bitcoin hasn’t been the only cryptocurrency enjoying this speedy growth, several Altcoins have also experienced an increase in demand.

What is an altcoin?

The answer to this short question “what is altcoin?” is just as simple because as the name implies, Altcoins are alternative coins which seem to be alternative to Bitcoins. In general, Bitcoin and altcoins share many similarities like mining process, peer-to-peer transaction, and so on.

Several altcoins are seeking to target the shortcomings of Bitcoins, like its lengthy transaction time, anonymity issue, costly and tedious mining process and inadequate functionality. In 2011, the first altcoin, Namecoin, was created. Namecoin was released shortly after Bitcoin’s launch and addressed related issues trying to solve those using a decentralized network.

What distinguishes the best altcoins?

The success of cryptocurrencies, like many other currencies, is mainly reliant upon a myriad of parameters like community, hype and the likes. Let us elaborate and clarify the ideas.

Partnerships and Investments: Companies are frequently using new cryptocurrencies and this has an impact on its value too.

For instance, Tron recently entered into a partnership agreement with top-tier video gaming platform Game.com, where users can buy virtual pets through TRX and consequently the value of Tron is expected to rise.

Generally, altcoins make use of two type of protocols:

As each method can have its unique advantages and disadvantages, below are the downsides of the proof of work protocol:

– To successfully mine the more popular coins using this protocol, one requires a high-grade setup.

– The mining reward decreases as more coins are released.

However, the proof of stake protocol eliminates the POW protocol challenges mentioned above through the following features:

– It Does not use up a lot of electrical energy.

– Does not need a high-grade setup (A simple laptop would do the job.)

– The validators are more loyal, and hence Validations are quicker.

Therefore, altcoins that use the Proof of Stake protocol are likely to gain more significant popularity as neither do they need a high-grade setup nor do they use up a high level of electrical energy. The proof of stake protocol however also carries certain loopholes. For example, if a small group of people owns most of the tokens, then they will be the validators.

– The Blockchain technology that an altcoin uses is the determinant of its success. Blockchains of various altcoins tend to have different characteristics, each of which plays a part in determining whether or not it would make it to the list of the best altcoins.

The blockchain features that affects altcoins include:

– The energy needed to be put in to secure blockchain.

– The level of mining difficulty on the blockchain.

– The time required to execute a transaction.

– The energy needed by a blockchain is a much significant factor since it determines whether or not most of the people will be able to afford to mine the particular altcoin. For example, POW blockchains tend to require a relatively high amount processing power and electricity.

Likewise, blockchains that come with a high mining difficulty level are usually more secure, and therefore, the price of the altcoin that is associated with it is always higher. Another factor that differentiates a top altcoin from a mediocre one on any altcoin list is the time taken to validate a transaction on the blockchain. An altcoin that has a low transaction time is usually the best one.

The vast amount of people (in their millions) connected to Altcoin nowadays, has resulted in the creation of a community around these Altcoins. This hype about new and upcoming Altcoins has a significant effect on value.

Problems that some altcoins try to solve – Bitcoins aren’t perfect despite its popularity around the world. Many Bitcoin users face issues especially regarding high transaction fees, which can be somewhat incontinent. A number of altcoins have already found solutions to similar obstacles while much more are trying to come up with even more excellent ideas. The more an altcoin can solve problems, the more it is expected to grow.

Team – If you are trying to find the best altcoins to invest in, or you are interested in top altcoins, the team behind the altcoin is one of the crucial factors to which you must pay attention. This part may seem a bit strange at first, however, as a matter of fact, the team has so much to do with any altcoin’s success regarding the in-depth knowledge of the currency and the ability to manage possible problems.

The best altcoins to invest in

. A platform targeted at YouTube creators’ dependency on advertisements for revenue, Steem pays their creators in cryptocurrency by the quality of their video content. So, it has features comparable to Bitcoin such as decentralization as well as unique features like encouraging people to be a part of a community. It is also a lot more stable than Bitcoin, which lets users use it to purchase goods and services.

It is a public blockchain platform that intends to present blockchain technology of NXT, utilizing child chains that are commonly called ‘light blockchains.’ The end users can customize these particular child chains, and it may also be used for the individual’s blockchain. It also strives to provide extensive scalability and Smart Contracts like those of Ethereum. JavaScript is the programing language for Ardor.

This altcoin which is one of the best answers for anyone asking the question “what are the best altcoins to invest in 2018,” is a blockchain based platform that possesses decentralized applications and autonomous smart contracts that have no single point of failure. Ethereum is programmed in Turing complete language, which gives it a broader base to build on and extensive markets to enter. The block time of this altcoin is much shorter than that of Bitcoin.

The primary aim of this altcoin is to create private blockchains for companies. It provides complete sidechains that are non-disruptive to the main blockchain. It also employs the proof of stake method. Rather than C++ language, Stratis has used C# language.

Undoubtedly one of the best altcoins to buy 2018, Litecoin offers itself as a substitute coin of Bitcoin. Litecoin solved Bitcoin’s problem of slow transaction that usually takes close to 10 minutes, as its transaction, on the other hand, takes just 2.5 minutes.

This quick transaction also helps in blocking double-spending attacks. Also, Litecoin is written in a cryptographic algorithm known as Scrypt, which is less responsive to custom hardware solutions such as Application-Specific Integrated Circuits which are frequently being used by bitcoin miners. This feature makes Litecoin more accessible to users who want to engage as miners.

It strives to be a decentralized digital currency, which protects user privacy while giving room for regulation simultaneously. Cardano is also a tech platform upon which more financial software can be developed.

. It wants to build a decentralized network where users can make payments entirely anonymously. It seeks to maintain a public ledger that reserves all the transactions. It uses the CryptoNight Proof of Work as its algorithm, basically because it is a derivative of CryptoNote. Monero uses ring signature to maintain user’s privacy, letting the user hide among other transaction outputs, stealth address to conceal the receiver’s address and RingCT to disguise the total amount of the transaction.

It is a means of crowdfunding that is mainly focused on cryptocurrencies, which serve as a brilliant source of capital for startup companies. It shouldn’t be confused with an IPO.

In an IPO, for example, when you invest money, you are given certain ownership in the company, but in an ICO, you only get a token of the given company for your investment. It may be practically worthless at that time, but in the future, it can grow in value exponentially, when it is widely used and is in high circulation. The token of the company is relatable to stocks, with more money flowing in, the token value increases.

How to trade altcoins?

Altcoins, as in any other commodity, are also traded to yield high rewards. These seem to be a very volatile market. Therefore, one must be careful while trading. The same forces and rule that govern traditional investments also govern altcoin marketplaces. You can trade them on Cryptocurrency Exchange platforms like:

HitBTC is a cryptocurrency exchange based in Europe. It uses advanced encryption technology, 2-factor authentication, and cold ‘offline’ storage protection. There is no deposit fee needed, but withdrawal fees differ depending on the currency. There are no deposits and withdrawal limits on cryptocurrencies. An order which is not executed instantly will be given a 0.1% discount on execution. Orders executed instantly will attract a 1% execution fee. This site was hacked in early 2015, but they insist that no user funds were affected. Read our full HitBTC review.

Probably the best exchange to buy altcoins, Binance is a multi-language exchange platform (offered in Chinese, English, Japanese, Korean) that centers on a coin to coin exchange. The exchange uses multi-tier and multi-cluster mode architecture that gives safety and stability. In a second, it can process around 1.4 million orders. It also boasts of relatively high liquidity. It even has its proprietary cryptocurrency named Binance Coin. It charges a flat fee of 0.1% for trading and deposit is free of charge. Read our complete Binance review.

The number of people who trade altcoin keeps rising steadily. As a new sector, both Bitcoins and altcoins are highly speculative and have some imperfections. However, as time goes on, new altcoins or the current ones manage to overcome the existing obstacles of the industry. Therefore, altocins become more popular and commonly used.

PreviousPrevious post:Local Bitcoins reported to be one of the most profitable entities in crypto industry
NextNext post:What is blockchain technology?