Here is Why Banks Hate Cryptocurrencies

Traditional banks have been principally against cryptocurrencies, often citing the fact that it has highly unstable volatility and can be used for money laundering. This is a somewhat ironic criticism coming from banks that are apparently paying huge sums of money on a regular basis to resolve allegations of money laundering or other financial scandals.

The real and honest answer to why the banks hate cryptocurrencies so much is the threat the crypto market poses to them. The growth of cryptocurrencies has surpassed all expectations and, while the notion is still quite young, it does have the possibility to shake up the aging fiat system. To have a better understanding of the competition between the banks and cryptocurrency market cap, we created a visual to see just how both markets compare.

Making use of information from Yahoo Finance and CoinMarketCap.com, a visual was developed to compare the market caps between some of the world most prominent banks and digital assets. 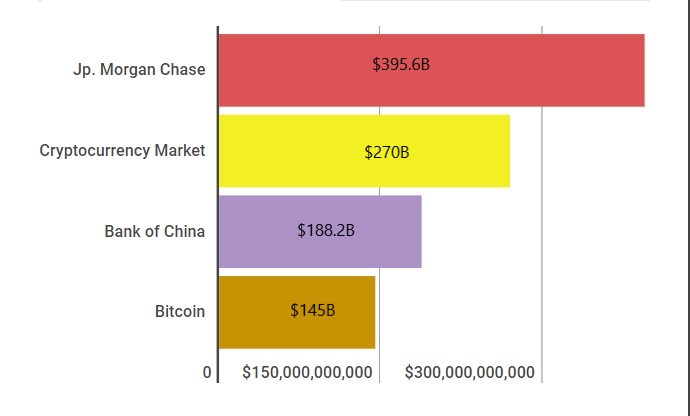 The chart to the left shows comparison of total market capitalization of one of the world’s largest banking institutions like Jp. Morgan Chase and Bank of China against Bitcoin and total cryptocurrency market. As displayed on the chart, the total market capitalization of cryptocurrecny market as of April 11, 2018 has amassed a whooping cap of $270 billion, which surpasses the capitalization of Bank Of China and get’s dangerously close to that of Jp. Morgan Chase. Given the volatile nature of the cryptocurrecny market it might not take long for this number to be surpassed as well.

Following a remarkably volatile beginning to 2018, digital assets are once again on the fast track. With new developments in blockchain and tens of ICOs raising funds in excess of $1 billion is not surprise that positive developments from the world of cryptocurrency have the banking sectors worried that digital currencies are on track to make substantial influence on their operations.

One of the most recent efforts to help slow the pace of crypto markets growth were statements from several banks saying that clients could no longer buy cryptos with their credit cards. Charlie Munger, the 94-year-old Berkshire Hathaway Vice President, has tagged Bitcoin “totally asinine” and says “it’s disgusting” that people purchase digital assets.

Overall, digital currencies are seeing their volume and value overtake even some of the most significant financial institutions in the world.

This has led to banks fighting back and attempting to impede their growth. However, even banks apparently don’t know what they want. After Jamie Dimon, CEO of JP Mogan famously called Bitcoin a “fraud” in late 2017; it is interesting to now see a statement issued by the investment bank that declares Bitcoin-based ETFs the “holy grail for owners and investors.” Obviously, we have a somewhat Jekyll & Hyde situation going with the conventional banks, which can’t determine if digital assets are friend or enemy.

So what’s your honest opinion: Are Banks Afraid of Cryptocurrencies? Let us know in comments below.

PreviousPrevious post:How to maximize your short-term crypto gains
NextNext post:Which are the best coins for beginners?