This exchange has not been subjected to any major attack since its inception in 2013, and it has always taken pride in providing top-tier security.

Regarding the security of accounts on Independent Reserve, the company’s servers are positioned in two secured data centers in Australia. By doing so, Independent Reserve can ensure zero data loss as the system simultaneously replicate data across both locations in real time. At the same time, there is an entirely configured trading platform on standby to replace the primary platform if the need arises.

All data is also encrypted many times and signed with disbanded keys from different data centers. It is also worth noting that the exchange holds bulk of the Bitcoins in cold storage. For client’s safety, Independent reserve offers 2FA (two-factor authentication) as an added layer of security.

The platform incorporates a multicurrency order book that will automatically convert the orders into the currency of choice. In short, this lets you take advantage of the entire pool of orders, therefore, enabling you to get the best possible price when trading cryptocurrencies as you can view all the market orders notwithstanding the currency that they are placed with. Also, the Independent Reserve’s platform also supports various order types such as:

The fees Independent Reserve charges on trading are based on tiered level. The trading fees become cheaper the more you trade. At the top of the scale, the fee is 0.50 percent, and it reduces relatively as the trading volume increases down to a minimum of 0.10%.

The fees charged on deposits and withdrawals, are determined by the payment methods used, and they are as follows:

Although the services of Independent Reserve are accessible to clients worldwide, the exchange’s primary focus is on Australia and New Zealand-based clients. Therefore, the deposit and withdrawal methods are inclined toward the Australian and New Zealand financial markets.

The following methods of depositing funds and withdrawals are available to Australian clients:

With POLi, users can deposit up to 5000 Australian dollars in their Independent Reserve account.

The Electronic Fund Transfer popularly known as EFT is also available to Australian trader. This method lets users deposit either in AUD or USD.

Besides fiat currencies transfer, users can also fund their Independent reserve account with cryptocurrencies like XBP, BCH, and ETH. 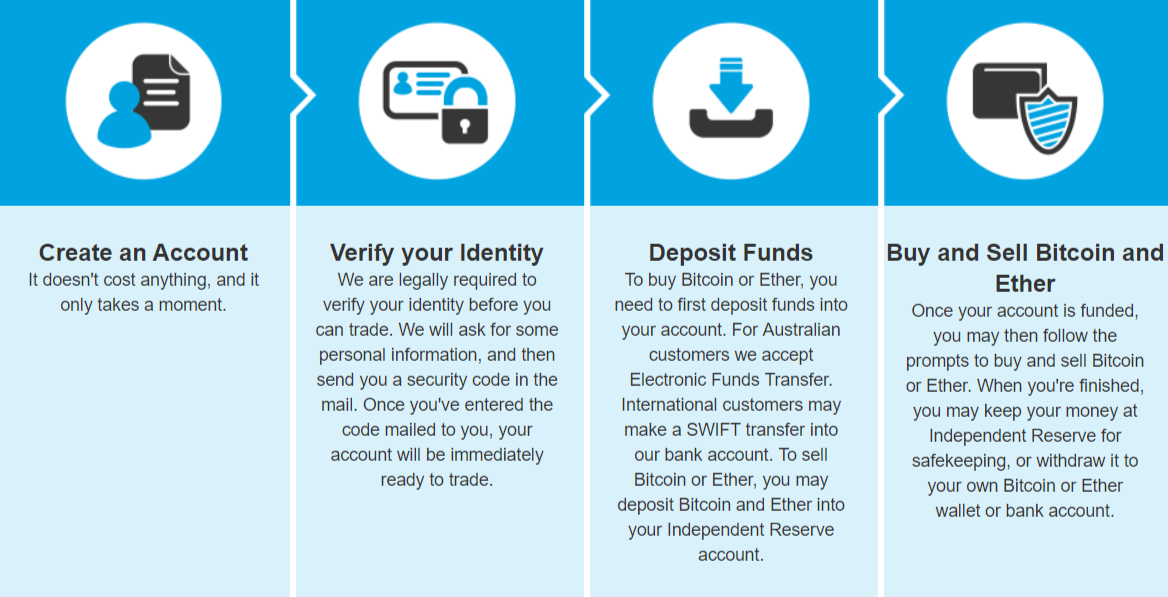 Independent Reserve is a renowned cryptocurrency exchange that dominates the Australian cryptocurrency market. The company was established in 2013 and has never experienced any security threat since its inception. Upon entering the exchange’s website, one immediately gets the feeling of professionalism. Independent Reserve accepts traders from many countries in the world, including the United States.

Overall, Independent Reserve’s services are of a reasonably decent quality when compared to what other cryptocurrency exchanges have been able to offer. But one thing which distinguishes this exchange amidst the rest is its support service.

The customer support service is reachable via several channels and the response time is relatively quick within 24 hours. Of course, the fact that the exchange also lets users fund their accounts with fiat currencies is an added benefit.

Please take a moment to register on our website so you can get all the latest reviews and free E-Books.

*Our customer support representatives may also follow up with you from our partners from FinAcademy.

Our Spring Sale Has Started

You can see how this popup was set up in our step-by-step guide: https://wppopupmaker.com/guides/auto-opening-announcement-popups/