There are literally hundreds of trading patterns which can all be recognized over time. Below, we look at five of the most widespread concepts and tools and show the most common examples of how technical analysis can be applied. The more of these you know, the more likely you’ll be able to conduct successful and profitable trades on both financial and cryptocurrency markets. And never forget to choose the right cryptocurrency broker  who takes care of providing its client with proper education.

Candlestick chart is the most widespread type of chart used in the technical analysis. This chart displays the HIGH, the LOW, the CLOSE and  the OPENING  for the price of specific asset for a given time frame. The wide part of the candlestick is called the real body and tell us whether the closing part of the candle was higher or lower than the opening price. If the candle closes below the opening price, we see the red body ( as seen on the  chart terminal). Such candle is also called a  NEGATIVE or a  BEARISH candle. If the candle closes above the opening price, we see a blue body.  Such candle is also referred to a POSITIVE or BULLISH candle.

We clearly see that the price was not trading higher than than 1.6800 while 1.6780 was a hurdle for the price to go further down, resulting in a prolonged price consolidation between mentioned levels. As such, it is safe to assume that Support and Resistance represent important price levels where potential reversal might actually happen. However, applying  additional tools like Moving Averages or trend indicators is recommended when using support and resistance as basis of your trading strategy. A simple example would be using overbought\oversold indicators like RSI or Stochastic Oscillator together with support and resistance to make signals more accurate.

A trend is the tendency  of the market to  move in a particular direction over time. It is an amalgamation of predictable price movements which the market takes when reaching support and resistance levels varying over time. Trends can be found on various time frames, and those found on the higher time frames can last for weeks, months and years. In simple words, market trend is the general direction in which the market goes or a period when the pattern of its movements remains unchanged.

Bullish trend ( or an uptrend) is a term used to describe the market which is  appreciating in value with each consecutive time period. In most of the cases, a trend is called bullish when the market is closing the day above the opening price. A bullish trend is associated with significant confidence and increased investing in anticipation that prices would rise in the future. One of the notable examples of bull markets include  recent rally in US Stock market  rally facilitated by the increased money supply  and India’s Bombei Stock Exchange rally which saw its index rising from  2.900 to 21.000 points in a matter of five years.

Bearish trend( or a downtrend) is an opposite to the bullish trend and is characterized by a general decline in the price of financial instruments over the period of time. It is usually  triggered by a sudden shift from investor optimism to  the fear and pessimism. Bear markets are associated with periods of  elevated economic uncertainty and underlying downside risks. The most recent examples occurred as a result of financial crisis. The Stock Market Crash of 1929 and the subsequent Great Depression were followed by prolonged periods of bear markets as well.

A range is a non directional market usually characterized by the price fluctuating  from top to bottom and vice versa. By finding major support and  resistance levels,the trader may identify the boundaries of the range, which may be further  considered  as good price points where a position can be opened.

Moving  averages provide a good analysis of historical trends. They are calculated over specific time periods, taking an average price across these with most of the  historical data excluded as the time period extends. A 20 day moving average applied on the price of the specific asset would not include the 21-st day into calculation. It  gives the trader a good glimpse as to where the average price is located, and can be very helpful in trading if a shorter period average is applied over it.

Shorter period averages , taking only a few days of historical data into calculation, always  float in the vicinity of current price. Therefore, if 5 day moving average is substantially shifting from the 20 day one, we receive a clear indication that the market is trending in a specific direction. It should be noted however, that  such occurrences should  not be interpreted only as trading signals, as something what may initially look like a new trend may be far from being what it looks like. However, moving averages can help foreshadow reversals and as such assist trader in spotting profitable long-term entry points , especially when applied with other tools.

Patterns play vital role in trader’s ability to identify long-term trends and trade successfully. With over 50 patters known to analysts very few have actually stood the test of time and proved useful in predicting potential outcomes.

Triangle patters are especially useful when it comes to  spotting potential breakout points and predicting continuation of existing or emergence of new trends. There are 3 types of triangle  patters occasionally seen on the charts: ascending,descending and symmetrical triangles. Traders should carefully look for these patters and get ready to take action once triangles converge. Below you will see comprehensive breakdown of each triangle patterns and use pictures as a point of reference.

Ascending triangle patters are bullish formations usually indicating a continuation of the upward trend.  The patterns is characterized by 2 trend-lines. The first trend-line is almost flat and commonly moves along the top of the triangle. The upper line acts as a resistance point which prevents breakouts by sending security’s price back to the lower trend-line. 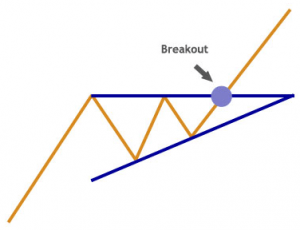 With each subsequent failure to break upper, almost horizontal resistance point both lines eventually converge. Convergence of both lines usually results in a breakout of upper  resistance level. The basic interpretation is that the pattern reveals that each time sellers attempt to push price lower, they are increasingly less successful.  This pattern is good for cryptocurrency trading as was frequently seen on Bitcoin and Ethereum charts.

Another way of using the pattern is following the supporting lower trend-line. As you may see on the picture to the right, each  subsequent failure to break below the lower liens results in a short wave higher until reaching resistance. Sellers get more  and more exhausted with each failure to break below the lower line. As such, in combination with right indicators supporting line can be a profitable buy signal.

As  the name suggests, descending triangle is exactly the opposite to the patter we’ve explained above. Characterized by flat supporting line on the bottom and down-sloping vertical line , descending triangle is a strong bearish reversal pattern giving traders a strong signal that price will keep moving down once the triangle is complete. Usually formed during long up-trends this pattern usually indicates that buyers are getting weaker each time the prices bounces off the support. Each subsequent attempt at pushing prices higher is weaker than before, and eventually both lines converge and price usually break below the support line. A good strategy in this case would be opening a sell position following the breakout. 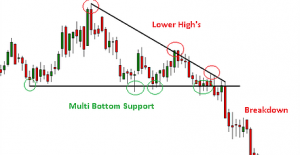 In rare cases  price fails to break below the support and moves up and breaks above the upper line. Such occurrences are mainly driven by fundamental events or by presence of longer term supporting lines visible on longer time frames. Make sure to analyze cryptocurrency price on several times frames before opening position.

Looking at the picture to the right it’s hard not to notice how logical this pattern actually is. Several attempts at breaking support were rejected , price bounced off back to the resistance line. But, with each failure price formed lower HIGH’s along the borders of the upper line. Eventually,both lines converged and price broke support line.

In this article we have explored the basic concepts of technical analysis and it’s application in cryptocurrency trading. While these concepts can be useful in most market conditions, remember that more education and diligence is necessary to become a good cryptocurrency  trader. Market is known to be unpredictable on many occasions and that is why traders should look at it from different angles  when trying to spot where next reversal or breakout may occur. Combining different indicators and finding which combination suits your trading style is a step each trader should take to build the right strategy. Remember that indicators have varying degree of accuracy depending on market conditions and in some cases the sound judgement would be taking a break while wild swings are underway. A smart, diligent trader understands that knowledge is power and money when it comes to trading and  thus will never stop learning , even if the set of skills he has acquired over time looks enough to achieve whichever goals he or she sets ahead.  Choose the right broker and start taking your steps right away.